The Story Vases tell the personal stories of five women from South Africa.

The project began with a series of conversations in Durban between Anna, Sofia and Charlotte from Front and Beauty, Thokozani, Kishwepi, Tholiwe, Lobolile of the Siyazama Project, a collective of women working with traditional beadcraft. They told about their daily lives, their husbands and children. They shared their hopes and dreams, and talked about love, life and death. Their stories also touch on such serious subjects as the effect of HIV on their society, gender, poverty and unemployment. They talked about their businesses and what beadwork meant to them.

Each of the vases tells a part of these stories, and documents the daily life of women in rural, post apartheid South Africa. Each woman formed their own story into text by threading glass beads on to metal wires. These wires were made into vase-shaped moulds, into which glass was blown.

With the Story Vases, Front used its conceptual approach to design, material and narrative to explore new ways of working with Zulu beadcraft in collaboration with the Siyazama. This long-term project aims to broaden the market for the women’s craft and to let their stories, which are seldom told, be heard by more people.

The workshop was initiated and organized by Editions in Craft. 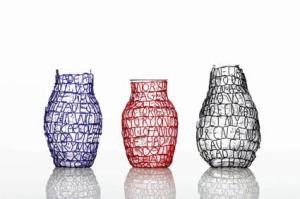